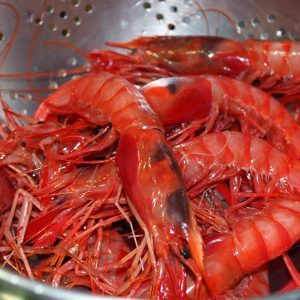 The Costa Brava offers one of the many variations of Mediterranean cuisine.  As the critic Jaume Fàbrega and the chef Enric Herce explain in their book “The Culinary Odyssey”, there is not just one Mediterranean cuisine but several.  Here the cultural and religious heritage, and the know-how of each Mediterranean region radiates. Contrary to the cliché this cuisine does not require a wide range of products but its richness lies in the imagination of the cooks who combine all the elements of the sea, fields, pastures and the mountains.  According to the authors, the ability to combine is the most important aspect of this local cuisine and they consider that Turkish cuisine is probably the closest to Catalan.  Among the typical dishes of Costa Brava cuisine, from Sea and Mountain,  we find the famous Palamós prawn and black rice dish – delicious!

We use cookies to ensure that we give you the best experience on our website. If you continue to use this site we will assume that you are happy with it.
Read moreAccept
Manage consent

This website uses cookies to improve your experience while you navigate through the website. Out of these, the cookies that are categorized as necessary are stored on your browser as they are essential for the working of basic functionalities of the website. We also use third-party cookies that help us analyze and understand how you use this website. These cookies will be stored in your browser only with your consent. You also have the option to opt-out of these cookies. But opting out of some of these cookies may affect your browsing experience.
Necessary Always Enabled
Necessary cookies are absolutely essential for the website to function properly. These cookies ensure basic functionalities and security features of the website, anonymously.
Functional
Functional cookies help to perform certain functionalities like sharing the content of the website on social media platforms, collect feedbacks, and other third-party features.
Performance
Performance cookies are used to understand and analyze the key performance indexes of the website which helps in delivering a better user experience for the visitors.
Analytics
Analytical cookies are used to understand how visitors interact with the website. These cookies help provide information on metrics the number of visitors, bounce rate, traffic source, etc.
Advertisement
Advertisement cookies are used to provide visitors with relevant ads and marketing campaigns. These cookies track visitors across websites and collect information to provide customized ads.
Others
Other uncategorized cookies are those that are being analyzed and have not been classified into a category as yet.
SAVE & ACCEPT